Uploading Attachments to a Proposal

The Attachments section of Cayuse SP is where your final proposal, budget, and solicitation (if applicable) will need to be uploaded. This is where all of the proposal documentation required by both the school and the Department of Contracts and Grants will be housed.

Note: A proposal preparer can attach documents in this section at any point in the routing process. 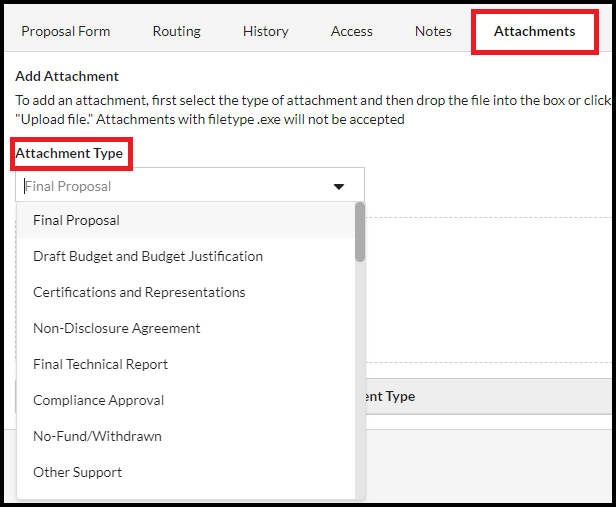 Award/Agreement
An award from the Sponsor, based on an approved proposal and budget, to carry out a specific activity or a fully executed agreement signed by USC and the Sponsor which defines the obligations of both parties, including the specific activity to be performed and approved budget.

Certificate of Insurance
A statement certifying that the entity is covered by insurance (this can be USC or the Sponsor certifying).

Compliance Approval
Approval from the USC Office of Culture, Ethics and Compliance.

Consultant Commitment Letter
A letter of commitment from a person employed on a short-term basis that will provide expert advice without
responsibility for a portion of the work scope.

Contract Release
An agreement in which USC releases any claims against the Sponsor.

Cost-Sharing Approval
Approval for any project cost that is not reimbursed by the sponsor to support the scope of work on a sponsored project.

Cover Letter
Institutional approval of the proposal, in letter form, along with summary information related to the proposal.

Draft Agreement
Draft or preliminary version of an agreement, including proposed revisions.

Draft Budget and Budget Justification
Draft or preliminary version of a proposal budget, including the justification of the anticipated project costs.

Draft Proposal
Draft or preliminary version of a full proposal.

Final Equipment Report
Final report identifying any equipment purchased during the performance period of the Award.

Final Proposal
Complete application for funding that contains all documents submitted to the Sponsor.

No- Fund/Withdrawn
Documents directly related to a No-Funded or Withdrawn proposal.

Non-Disclosure Agreement
A fully executed agreement between USC and the Sponsor related to the proposal and/or award that outlines the exchange of confidential information that the parties wish to restrict access to by third parties.

Other Support
Financial resources available in direct support of a PI’s research endeavors, including pending and current support.

Documentation of a PI’s approval of exceptional terms and conditions of an Award (includes non-financial and financial information).

PreAward Approval
Approval for an extramurally funded project to be established prior to receipt of the award from the Sponsor.

Pre-Proposal
Project objectives that is required by a sponsor in advance of the submission of a formal proposal.

Project Outcome Report
Summary report prepared specifically for the public of the nature and outcomes of the project.

Relinquishing Statement
University approved official statement relinquishing interests and rights of an award to another institution.

Revised Budget
A modified request for funding generated or received after the original proposal was submitted to the Sponsor.

Scope of Work
Work to be performed on a sponsored project (deliverables, timelines etc.)

Sponsor Approval
Documentation of a Sponsor’s approval (non-financial or financial) of a revision to the award (e.g., no-cost time extension, change in PI, rebudget, etc.).

Sponsor Guidelines
Written instructions from a funding agency regarding the submission of proposals.

Sponsor Solicitation
Announcement that indicates the availability of funds for a topic of specific interest to a sponsor.

Subaward Budget Justification
Categorical description of a subrecipient’s proposed costs, including the methods used to estimate/calculate.

Subaward Commitment Letter
Proposed subrecipient’s intent and approval to collaborate with USC as part of a sponsored research project.

Subaward Scope of Work
Work to be conducted by a proposed subrecipient, including deliverables and (if applicable) the time frame in which they are to be delivered.

Submission Confirmation
Confirmation from the Sponsor that the proposal has been successfully submitted and received for review.

How to submit your event

See all events in the USC Research Calendar.